I was in Bogota in late August to start shooting the pilot for a series on food, living systems, regenerative agriculture, pleasure, challenges, science, and meaning. I told my friends at the production company in Bogota "guys, these are the days I can come to Colombia, let's do this!" and booked the ticket.

I was planning on looking for interesting high end chefs celebrating Nature, some traditional food restaurants and perhaps a short foraging and/or hunting adventure in the outskirts of Bogota.

2 days after I booked the ticket, I see on my FB feed a post from Mugaritz, (the No 6 Best restaurant in the World this year) that said "See you soon Bogota!". WHAT?! I immediately clicked on the link, booked my place at the Mugaritz dinner in Bogota and found out there was a gastronomy festival putting this awesome event together called Alimentarte, which translates roughly as "Feeding You" and is a play on words between Alimentar (To feed) and Arte (art). 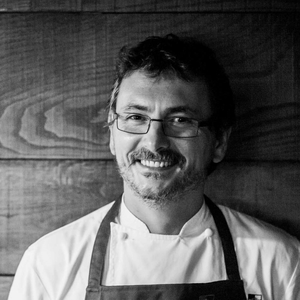 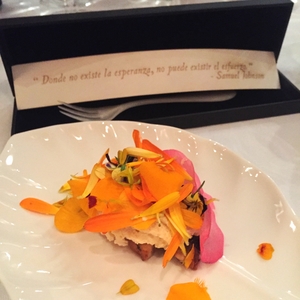 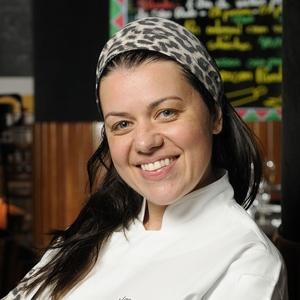 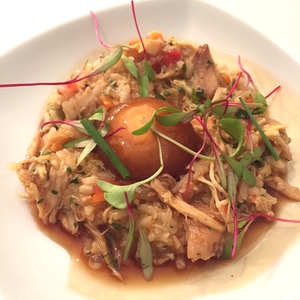 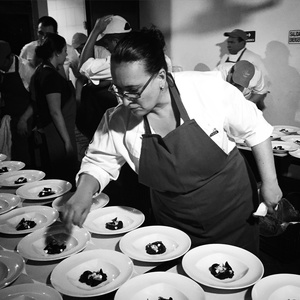 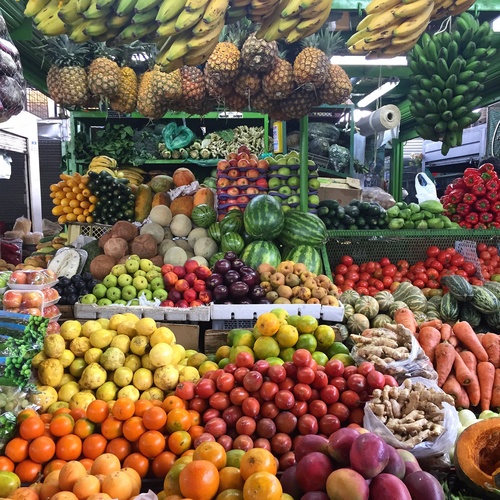 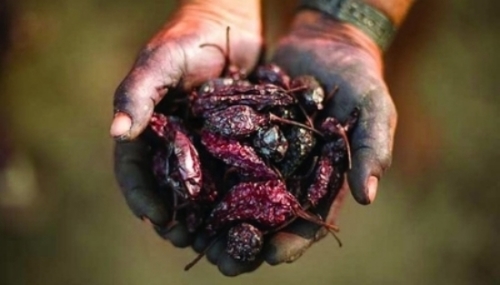 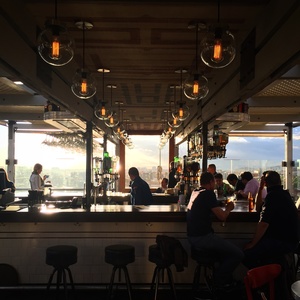 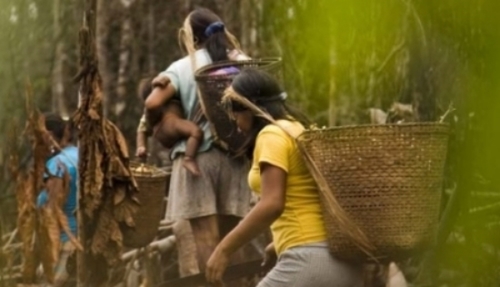 EATING WITH THE SEASONS

"There is a beautiful ancient Chinese story which tells of a magic potion for eternal youth. And if you were to follow the recipe, it would take about 12 years to gather the ingredients. It's a metaphor for the journey. Once you taste the seasons, the landscapes, the flavors, the climates and the specifics of each terroir if you will, it's as if you're 'inoculated' with the world. That'll keep you young forever."

Not only did I meet Andoni Luis Aduriz (Mugaritz) the first day in Bogota, a handful of amazing people from different countries welcomed me and my team in a fun, warm and hospitable way. Ximena Hernandez, a consultant in Spain, introduced me to Andoni Aduriz, to Luciana Bianchi (who cooks and writes with and about chefs such as Massimo Bottura (Osteria Francescana in Modena, Italy), Antonio Bachour and Virgilio Martinez (Central, #1 50 Best Latin America 2015! - Lima, London); I also met Janaina Rueda who runs a handful of interesting restaurants in Sao Paulo with her husband Jeffim Rueda (Bar da Dona Onça in Sao Paulo is one of them) and the Peruvian demi-god Gaston Acurio who was wise, warm and welcoming. The event was brilliant, Bogota was delicious and the people are some of the warmest, most fun and vibrant in the world.

We shot interviews with Andoni (Mugaritz), Luciana and Janaina, they welcomed us in their kitchens. We shot, we ate, we celebrated food and sharing meals. It was delicious and it was mind-expanding.

Andoni is the kind of guy who will push the envelope with every single sentence, loves to question, doubt, create and tease your mind and palate. The Mugaritz dinner felt like bringing a Contemporary/Conceptual Art show to your mouth and mind. In his own words, he wanted the tasting menu to be like a fashion photograph.

In the middle of the Mugaritz dinner tasting menu at Harry Sasson restaurant came his dish "Decadencia". He says: "Florence in the 17th century was very powerful. Having golden utensils in the home was almost considered vulgar because anyone could have them. Sugar utensils now, THAT was the ultimate luxury. You have an army of people making these time-consuming cutlery sets which wouldlast only one meal. So decadent."

We talked ecosystems, creativity, sustainability, countryside-city relationship, the many ways culture and nature meet and the power of gastronomy as a force to draw tourism, spur economic growth and reconnect people to the land, the soil, the inmense variety of ingredients and cooking.

To me, cooking is as if (or exactly like) we are mirroring nature: we cook, chop, steam, heat, transform, pre-digest, ingest and digest. We transform reality, we transform ourselves and our body in the process.

That is what the forest, the ocean and the landscape do. Nature sprouts, grows, blooms, falls, cooks, digests, and creates new life again. That's called an ecosystem and it cycles nutrients. We are part of that nutrient cycle. When we are alive as a transforming player in the cycle, when we die well, as organic matter to be cycled to create more living matter.

And living matter is what we went after:  we visited traditional restaurants in Bogota serving restorative powerful dishes such as Blood Soup and er... Bull "crank" soup: Traditional soup recipes that have been handed down for several generations high up in the Andes.

I am fascinated by organ meats. They are packed with micronutrients and enzymes in a way that muscle meats are not.

Maybe we could learn from some other keystone species such as Wolves, Lions and other apex predators. The alpha members of the pack usually go for the the heart, liver, kidneys and so on. The muscle meats are for the other guys. Most likely because the CoQ10, B and A vitamins, copper, iron, folic acid and other powerful nutrients make organs the ultimate complete meal, good for your heart, brain, joints, muscles. Basically, you get A LOT of bang for your buck. And it was a pleasure to find these restaurant gems, that served so much offal goodness!

Doña Gladys, serves Bull 'crank' soup (penis and testicles), the most collagen-packed soup I've ever had, it was like caffeine for your brain. WOW. Served with a side of avocado and white rice. Scrumptiously powerful. Coma de Paso Restaurant, 12 de Octubre Market - Bogota.

And then there was dessert. Because life is so much tastier with chocolate...

Since I was a kid I've chosen chocolate as my close friend and ally. Always there, always constant, always so comforting, reassuring, deep and delicious.

Mayumi Ogata from Japan has been working with Cacao in Colombia for about 3 years, exploring different regions and flavors. She works with elders from the Sierra Nevada in the Caribbean Coast among other indigenous commmunities to celebrate Colombian Cacao and make delicious chocolate.

She told me the story of how, before fermentation, she'll smell, taste and appreciate the raw fruit. How she will close her eyes to perceive what specific color and notes come to mind. Berries? Citrus? Raisins? Honey? Flowers? Mayumi will then decide on the fermentation process to bring out those specific qualities of each region. Gorgeous cooking process..

Some say we are on Earth to experience Chocolate. I can't wait to go back to Colombia, shoot with Mayumi and the growers in the Sierra Nevada, and then go see her in action in Tokyo during St Valentine's next February.

The final highlight of this trip was meeting Silvia Gomez and Barbara Santos, the 2 women behind this delicious project called WAIYA.

For the past 5-6 years, whenever I am in Colombia I'll make sure I bring back a tiny glass jar with a chili powder straight from the Amazon, deep into the jungle near the border with Brazil.

It's one of the regions in the Amazon that has better preserved their ancestral culinary and medicinal knowledge. A handful of women from different communities in the region take care of the chili, from planting to harvesting, to slow-smoking it and grinding it by hand. The chilis are actually laid on baskets made of palm leaves very high above the smoke so they dry and smoke slowly. They're blessed by the shamans and are a central part of their culture.

I like to remind myself that with each bite, we inoculate our gut and our whole body with the vitamins, minerals and other nutrients present in our food. Every time I put some Waiya chili on my food I remember I am inoculating myself with a bit of Amazon Jungle and the ancestral relationship with the people who live in it.

Waiya is one of the deepest, hottest and most delicious experiences I've had. And it is also a small batch production, always unique because it is all handmade. And sometimes it's unavailable, which is both a bummer and a beautiful thing.

Their WAIYA project goes well beyond the chili. They are about to publish a comprehensive book written and illustrated by the indigenous communities themselves; they work on conservation and protection projects with them among many other endeavors. On top of that, Silvia and her husband run an organic and pastured animal farm near Bogotá called Proyecto de Veras.

Cheers to awesome humans doing awesome things around the world.